90th Birthday Party and Coming Down A Mountain

It was another busy weekend for us running (pun intended) all over socal.  On Friday we headed down to San Diego to celebrate Carly's grandma's 90th birthday. We all met up at the Stone Brewing World Bistro for a late lunch/early dinner.  There were 14 of us and they gave us a great table outside in the corner that was nicely shaded and semi-private.  It was the perfect setting.  Since the food at Stone is amazing, we knew that we had a great meal ahead of us.  We shared a deep fried mashed potato appetizer and for our entrees I had the Mac n' Beer Cheese and Carly had the Tempeh Shepherd's Pie.

It also happened to be Stone's 15th Anniversary weekend so they had a few special beers on tap.  I tried the 15th Anniversary Escondidian Imperial Black IPA which was amazing.  I am not a huge fan of dark beers but I could drink this all day...or for part of the day seeing that it's nearly 11% ABV. After a delicious dinner and some beers we finally got to sink our teeth into a chocolate cake with chocolate/raspberry filling and fondant icing from the For The Love of Cake bakery:

I had the pleasure of slicing this cake and according to everyone at the table I have a second career in being a cake slicer.  So, if I ever get laid off...what out cake industry!

The next day we shook off the beer and cake coma and went for our weekend run. Since we were out of town we got to explore a new area.  We decided to run down a mountain (ok, so it was a highway). The whole time I had the beginning of this song stuck in my head.  We ran along the Del Dios Highway in Escondido which took us past Lake Hodges and then along the highway for a while.  Special thanks to Father-in-Law Jesse's Irish Taxi service for picking up at the end of our route.  Here's the map:

Later that day we visited one of our favorite San Diego restaurants, Pat & Oscar's.  Their breadsticks are addicting, amazing and I wish I could have more right now.  Then, to continue the eating extravaganza we headed back up to LA to meet up with my Dad and brother for dinner at El Coyote Mexican Cafe.  It's an LA Mexican food institution.  If you are ever in the area it is certainly worth visiting and they make a mean margarita. After dinner we attended a screening of Kevin Smith's new movie called Red State at the New Beverly Cinema.  It was our second time seeing the movie and it was just as good as the first time around.  It leaves you feeling unsettled through out the entire movie and you don't quite expect all the twists and turns. Kevin Smith did a short Q&A after the movie as well and it's always fun to hear from the filmmaker right after seeing the file. 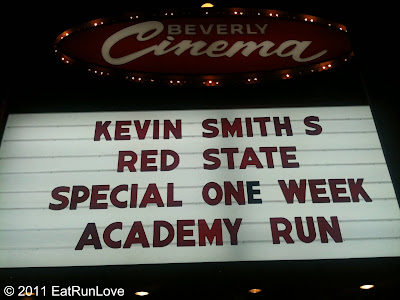 - Clayton
Posted by EatRunLove at 4:14 PM