So we’re officially half way through our month detox/diet program and going strong. First week was pretty easy, but we started to get some cravings between week 1 and 2 which means Halloween night will only be that much sweeter when we come off the diet.

We’ve managed some meals out, though.  We went to BJs with Clayton’s family; they even have a gluten free menu. We settled on a big steak salad without the blue cheese and substituted ranch for honey mustard. Another night we went to see a hilarious comedian Paul F. Tompkins in Glendale with Clayton’s brother and planned on eating at CPK who also has a gluten free menu (even just a couple years ago this kind of diet would have been that much harder), but when we couldn’t find the restaurant we opted for protein style burgers at In-N-Out (and happily enough fries are allowed – no gluten or sugar there!). We recently went to Killer Shrimp in Marina del Rey and had the Shrimp bowl (traces of dairy in the broth) and the filet mignon (butter sauce on the side) with the asparagus side. Both were absolutely delicious and didn’t compromise our diet. This actually was the night we brought home our newest addition, 3 month year old kitty who we named Louie after Louis C.K.’s TV show (and it didn’t hurt that he is light orange in coloring)! 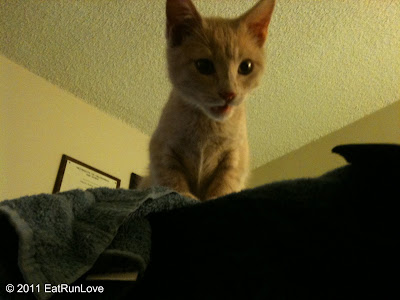 Tonight Clayton made an awesome turkey chili. He found the recipe on the Whole Foods site. Only thing that had to be omitted was the hot sauce because it has vinegar. Fine be me, though, had just the right amount of kick from the cayenne pepper and chili powder. And now we have enough left for at least another dinner. Tonight he’s making another Whole Foods recipe, a chicken and wild rice casserole. Looks so good – wild rice which has a really nice firm texture, cranberries, walnuts, squash, etc. The wonderful thing about this diet is that it forces you to try new things.

So far both of us have certainly noticed we don’t have any stomach discomfort or indigestion. I had a few headaches in the beginning (maybe due to change in diet or just coincidence), but haven’t had any since. We both have noticed just how much food there is at work when you’re consciously not eating it. It’s been nice to be able to cut out those extra calories. Wish us look on the next 2 weeks!