I can't believe it's been almost 6 weeks since we last posted! I don't think I'll take the time to fill you in on everything that we did since the last post so just imagine that it was AWESOME!

On the eating front, the big news in our house is that we got a brand spanking new Kitchen Aid Artisan Series stand mixer. The next day we busted our our Martha Stewart cookies cook book and made a few batches of her Banana-Walnut Chocolate Chunk Cookies. You'll just have to take our word that they are delicious! 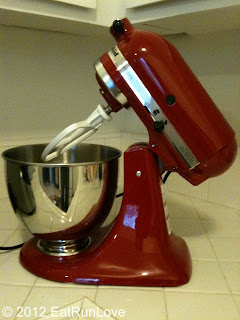 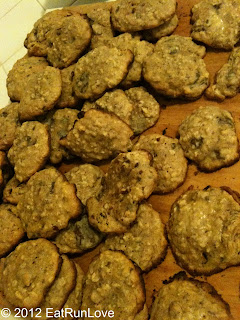 Back on December 27th, we went out for Carly's birthday to a great little Italian restaurant in Venice called Ado. It is definitely one of those places that someone needs to tell you about because it's pretty hidden and not in an area where you'd accidentally stumble upon it. We shared an amazing home cured duck prosciutto appetizer and then each had a pasta for dinner that paired nicely with a bottle of chianti. Buon compleanno!

We are also gearing up for our next big run on January 22nd -- The Carlsbad 1/2 Marathon. The training for this race has been challenging for both Carly and myself. About 4 weeks ago, my right knee started to hurt when I ran any distance above 4 miles. It felt very similar to the pain I felt in my left knee after running our first half marathon. I decided that if I was going to actually finish the race in Carlsbad, I would have to stop running and let my knee heal. That said, I will be running the Carlsbad Half not having finished the last 5 weeks of training. I am confident that I will be able to finish the run but we'll see how my finish fares. While I've been sidelined, Carly has been sticking to our training schedule. She's managed to do most of the short runs and all the long runs (including a 12 miler this past week) alone. It's a new challenge for her to do that distance alone but she's been keeping her pace right around where we normally are so clearly I am not needed :)

I do look forward to being able to run again full time. I will need to make sure both my knees are in good shape because we are doing our first full marathon in June -- The Rock 'n' Roll San Diego Marathon! More on that race after we finish Carlsbad.

I've been trying to find alternatives to running so during the time between Christmas and New Years, we explored some local places for a hike. First we went to the Baldwin Hills Scenic Overlook in Culver City. There are some stairs there that take you up to an elevation of about 400 feet and you get an amazing view of Los Angeles from the ocean to downtown. Today we went and explored Runyon Canyon in the Hollywood Hills. We took the most challenging trail to the top and then took the leisurely trail on the way down. Along the way there are many places to stop and take in another great view of Los Angeles. I look forward to going to both of these places more often.

We've spent a lot of our time off this holiday watching The Sopranos. I never watched the show when it was on and either did Carly. She got me the complete series on DVD and we'er about half way through the second season. The show is amazing and while I'm sad I didn't watch it while it was on, I'm very excited to be watching it now. We also saw some fantastic movies recently including The Artist (will probably win Best Picture), Hugo (best use of 3D this year by far), Mission: Impossible - Ghost Protocol (crazy IMAX footage), The Girl With The Dragon Tattoo (another Fincher masterpiece and a scarily good performance from Rooney Mara), Young Adult (uplifting, depressing and amazing) and probably a few others that I'm forgetting. I love Oscar season! Looking forward to seeing a bunch more movies in the coming weeks as the nominations are announced.

That's about it for now. Hope everyone had a safe and happy new year! Here's to 2012!

- Clayton
Posted by EatRunLove at 8:44 PM